Part A of the Alberta ELA 9 Achievement test is itself in 2 parts:

Suggestions for Preparing to Write the Narrative/Essay:

Assessment of the Narrative / Essay Writing
Assignment on the achievement test will be in the context of Louise Rosenblatt’s suggestion that “the evaluation of the answers would be in terms of the amount of evidence that the youngster has actually read something and thought about it, not a question of whether, necessarily, he has thought about it the way an adult would, or given an adult’s ‘correct’ answer.”
Rosenblatt, Louise. “The Reader’s Contribution in the Literary Experience: Interview with Louise Rosenblatt.” By Lionel Wilson. English Quarterly 14, no. 1 (Spring, 1981): 3–12.

Example Assignment for Writing a Narrative or Essay

Example Student Response for Writing a Narrative or Essay

Suggestions for Preparing for Writing the Business Letter:
Wikipedia on business letter

Format of a Business Letter

Envelope of a Business Letter

Example Assignment of a Business Letter

A while back I received the following invitation:

“A Panacea of Poetry East Central is having a poetry contest! It will be positively poetic and panoptic!

The first phase we undertook in Grades 9 and 10 was to explore Ladders to the Dark. The first poem was published, April 21, 2009. And today 38 students have written over 350 poems, fragments, and musings.

Links to all published poems can be found at our Queneau blog, aka Random Poetry, in the comments section following each exercise.

Now, here’s what I would like to see from students, today:

Today, three poems in Grade 9 and three poems from Grade 10 will be entered in the next phase of the contest.

UPDATE: 3:30PM May 6, 2009
The Finalists:
Grade 9
My Mind Is High
Ivory
In the Midst of the Fire
Grade 10
Unique
Reflection
Turning Back

Create a “Who Am I?” crossword puzzle for your group/class.

Use the following, or similar, crossword puzzle maker.

Attach a printable copy of your completed puzzle to a post and pingback here.

We asked ourselves these questions.
We watched this film.
We made many connections to the world here.
We used this software.
We wrote these.

Pick a question(s) from “The Human Condition” course focus questions.

Read a news story(or 3-5 related stories) that in some way explore “The Human Condition.” (adding RSS widgets from cbc.ca/rss/ is a great way to do this.)

Write about the news while at the same time responding to the focus question(s).

Who am I? We often speak of one’s “personal identity” as what makes one the person one is. Your identity in this sense consists roughly of those properties that make you unique as an individual and different from others. Or it is the way you see or define yourself. Or it may be the network of values and convictions that structure your life.

An example from me illustrates the question, Why do we do what we do?.

Please pingback a new sample of your writing about the news to this post, and/or leave a comment.

Monday evening, after the kids went to bed, I sat on the couch watching “Terminator” immersing myself in my weekly paranoia about machines one day bringing an end to humanity. The gist of this episode, like the films, put the basic humanness of its otherwise innocent characters on a bleak collision course with a war of extinction with “the machines.” The future looks bleak indeed.

But this episode had too much dialogue, too much weeping; no car chases, no gun fights. I quickly lost interest. 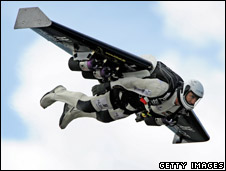 I wandered the web on my MacBook when I stumbled accross a BBC story of a former Swiss miltary pilot crossing the English channel with a rocket strapped to his back. I watched the video. I watched in silence as he jumped from a plane in Calais, France, and zipped off into the blue. I watched as he blasted past onlookers and chase planes. I watched as he deployed his parachute and landed in Dover, England, with nothing more than a stumble.

No threats, no deaths, no terror, no markets collapsing, no war, no hospital waiting rooms, no polution. Just one man, with a a rocket strapped to his back leading by example.

This story fills me with hope. There are yet a few hope-filled heros who do not become distracted from their focus; no obstacle clouds their pursuit of an ideal; no risk is unmanaged.

“I’m not worried about risk, I manage risk”, he said. What a profound confidence.

Next week, when I sit down to watch “Terminator,” it’ll be a bit easier to remind myself that a bleak future is fiction. Human fulfillment is possible if we do what we do with love, with joy, and with faith. Yves Rossy is “down to earth” by reminding us we are called to the stars.

“Flight of the Jet Man,” airs again on Friday October 3rd on National Geographic Channel(US). Can anyone find out when(if) it’s on in Canada?

Please leave a comment with a critical reason for your preference of films.

Today I was asked: “How do I write a book review?”

Here’s a quick trip about what I found:

My first stop was at Amazon. With each book is a snippet of a responses from readers/buyers/sellers. The purpose of the reviews are simple – take a few seconds to write a sharply worded sentence or two and recommend the book for sale. In a few minutes and swift clicking I can read hundreds of reviews. The reviews are brief, many amounting to glowing praise or stark rebuffs. Some attention is made by review writers to carefully craft sentences, few reviews amount to more than a sternly worded paragraph. The reviews are focused on the text and personal preference, but with so many sweeping generalizations there was rarely a focus at all. Little is learned about the reviewer. These “pesky” reviews are not what we need to mimic.

My second stop was the more personally focused site, One Minute Reviews. The reviews here are written by one reviewer. The reviews range in length, depth. Some a few sentences to recommend a sale, others quite elaborately synthesize a variety of information. The summum bonum of the experience is to grow in an understanding of the reviewer. I like this approach to the book review better. However, I could not relate to the bulk of the experiences of the reviewer, and shared few if any common interests. The focus was too narrow and I lost interest in the site.

Quality Book Reviews was just too busy. Too many links, too many distractions, too many book reviews. It would take a while to find a reviewer I liked as the “finding” would be left to chance. Something this big is more than I need. Searching for author, title, reviewer is useful, but I need a smaller focus, a more modest audience, a warmer welcoming.

Real Reader Reviews looked the most familiar to what I’d expect for beginning reviewers. But again, the focus was amiss. After a few clicks, it felt like I was reading the same review over and over again, with no real exposure to the personality of the reviewer.

The Teen Book Review is by far the best fit in my hastily assembled survey. I spent so much time reading and marveling, that I have run out of time to write much here.  The focus was clear. The text easy to read. The text linked/bolded. There were no distractions in the sidebars. The post layouts were simple and varied. The variety of posts reflected the author’s identity. The personality of the reviewer beams through: “Gone is a huge book, over 550 pages, but the time passed so quickly while I was reading it, and I just couldn’t put it down! Last night, taking a break from my history homework, I picked it up, intending to read a chapter or two and then  get my brain back on track. Instead, I read two hundred pages. That’s how absolutely engrossing this book is!”

Have a long close look at Teen Book Review. These are reviews we should mimic.

Thanks to a few bloggers for helping me work out the bugs in the microcontent code. Movie, music, and video game reviews appear to be the most popular. I still haven’t, yet, found a sure fire method of aggregating all the reviews – POGE. The FREEoutputthis.org looks promising.

Anyway, for the time being, trackback your microcontent posts here.

Trackback/pingback your posts about the news here.